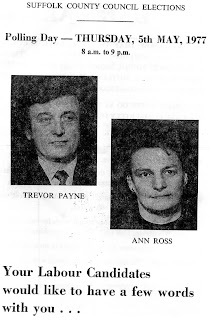 Visiting the Party Office on Wednesday I was presented with an election leaflet from 1977. It was for the Chantry Ward in Ipswich for the Suffolk County Council election. The Labour candidates were my mum- Annie Ross and Trevor Payne (Trevor's wife gave me the leaflet). The leaflet did cheer me up, I was a bit pissed off that the Tory candidates had taken credit for the Zebra Crossing that is to be placed on Rushmere Road when they actually voted against it! This leaflet put that into prospective as I was worried about something like that when in 1977 my mum and Trevor were campaigning for a single 6th form centre for that part of town- we are just about to start building this centre- 31 years later!
The leaflet also shows how much a Labour Government and Labour Councils have achieved- in 1977 Labour was campaigning for a nursery school in every area in the town - something we now take for granted with SureStart and free nursery places for all three year olds.
Some of the leaflet is still relevant, with the leaflet pointing out that a rural led Suffolk can not have the best interests of an urban Ipswich at heart- the same reason why we are still seeking unitary status. In 1977 the rural- Tory led County Council had closed Ipswich school swimming pools at the same time they had given a £5,000 grant to Woodbridge Golf Club for a sprinkler system!
The leaflet did also make me chuckle, and it does show that the Tories have changed (slightly). I am sure you all will have a smile on your face when you read the first paragraph from the leaflet:
"Did you know that the Conservative County Council is run by an assortment of Tory ex Army Officers; A General, a Brigadier, four Colonels and two Captains? They are supported by a motley company of Knights 'Gentlemen farmers,' the Honourable this, that and the other.
The other ranks do as they are told;
They are completely out of touch with Ipswich people, their actions prove it!"

They don't write leaflets like that anymore!
Posted by Alasdair Ross at 20:47