Ipswich Buses - only safe under Labour 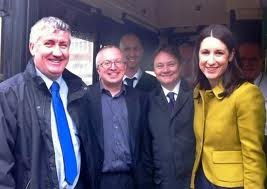 Ipswich Labour have always promised to do all we can to help save the Ipswich Bus Company.

Ipswich are now one of only eleven municipal bus companies left in this country with Edinburgh and Blackpool being the two largest.

John Carnall the Tory leader even stated a few days before the local election in 2011 that his intention was to sell the Bus Company off. Labour won so that put a stop to his plan, but the company is under plenty of pressure from outside influences.

The Tory run Suffolk County Council took away the Park and Ride franchise when the Ipswich Tories were in power and have since cut back on the rebate given to IBC for pensioners fares and taken the 'Explore' card away completely whilst the Tory Government is about to reduce the diesel fuel rebate it hands to bus and coach businesses.

Yesterday Rachel Reeves MP and Iain Wright MP visited the Ipswich Bus Company along with David Ellesmere and were very happy to see that Ipswich was still maintaining a municipal bus service.

But do Ipswich residents still want a council owned bus company? I think they do and it is far better than the alternative that Iain Wright told us about, in Hartlepool they no longer have a bus service run by the council and the council also can no longer afford to give the private bus company money toward subsidising routes - so what does Hartlepool now have? No buses after 6pm during the week and no weekend bus service at all. If that's what you want in Ipswich- Vote Tory but I am sure most of you would like not only to keep our 'Green' buses but to improve the service - then you have to vote Labour.
Posted by Alasdair Ross at 13:31