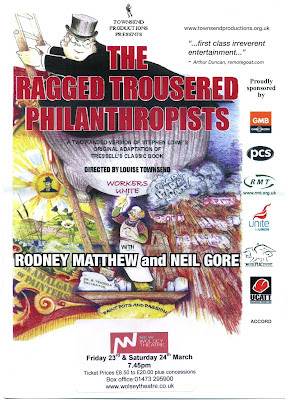 On Friday, I visited the New Wolsey in Ipswich to watch 'The Ragged Trousered Philanthropists', a strange theatre experience with over 100 members of Ipswich, Suffolk and Colchester Labour present to see what has become known as the first major novel of the British working classes and is now a socialist classic. Strange as it felt more like an East of England Labour AGM that a normal Friday night at the theatre.

I must admit I had heard of the book but knew little of the story. Written by Noonan an Irish sign writer who used the pseudonym of Robert Tressell (after the painters table). it tells the tale of the lives of painters and decorators in a fictional seaside town (based on Hastings)

I found the play both entertaining and also educational, I can see why the 'great money trick' from the play is used in schools to help explain capitalism.

I now have the promise of the book (from my wife for Fathers Day) and I can't wait to read it. But if you get the chance to ever see the play - go. It certainly makes you keener to get out and campaign after watching it.

Tressell believes that the workers are the real philanthropists rather than their bosses. Wonder what he would have thought this week after we hear for £250,000 you can meet the Prime Minister and help set policy - guess they would call that philanthropy!
Posted by Alasdair Ross at 17:49