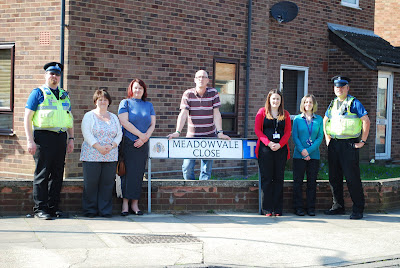 Last week I was invited to the Meadowvale Close No Cold Calling Zone Launch‏, it was a great afternoon and gave me an opportunity to speak to a number of residents about issues in our ward.

This was the seventh No Cold Calling Zone to be set up in Ipswich and the first in Rushmere Ward.

The scheme was the idea of 'Community Champion' - Sandra Gage. If every street in Ipswich had someone like Sandra living in it, Ipswich would be an even better place to live in than it is already. 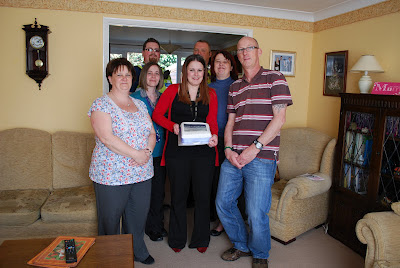 Well done Sandra, the Officers from Trading Standards and PCSO's from Heath Road.

Just in case anyone gets the wrong idea, I went to meet residents not just to eat cake!!

Promoted by John Cook c/o Ipswich labour Party, 33 Silent Steet, Ipswich, IP1 1TF on behalf of Alasdair Ross and the Labour Party Candidates, . Hosted (printed) by Blogger.com (Google Inc) of 1600 Amphitheatre Parkway, Mountain View, CA 94043 who are not responsible for any of the contents of these posts.
Posted by Alasdair Ross at 20:02

That's all very well but it now means cold calling scumbags are concentrated in the neighbouring streets. I live in Lonsdale Close and there's been a distinct increase in the number of uninvited oiks calling to try and sell stuff.

If you ask them what are you selling of course they are never selling anything. It's time for the entire town to become a no cold calling zone ;)