After a fantastic Olympics, Mr Cameron was quick to tell the public that the government will continue to fund (elite) sport – even if the promise is only to 2016.
Closer to home, Ipswich Tories (and I guess that means Cllr Terry) have also jumped on the bandwagon and told the public what a sporting legacy they have left the Ipswich public.

Not sure much of a legacy has been left – a further years of the Tories in power in Ipswich would have seen the council pull out of Maidenhall Sports Centre and seen the Whitton Sports Centre given away to an outside agency.

Ransomes Sports Centre is mentioned again, but no credit given to Ipswich labour from saving the club and sports ground from developers in the first place! But surprisingly after all the scare stories put out by the Tories they now seem keen to build some houses on the site, possible on the site of the now disused bowls green!

But Cameron and the Ipswich Tories will not persuade the public they are serious about any sporting legacy whilst Mr Gove has any sort of power.

The Primary Schools Sporting Partnership was one of the first casualties of Mr Gove becoming Education Minister but his next target is selling off school playing fields. Now I will admit Labour should have done more to protect school playing fields whilst in power and the Tories have used statistics to show that they have not closed as many as Labour – trouble is it now has come to light that those figures were wrong and to top it Mr Gove has agreed to the sale of a number of sports fields even though he was advised not to sell them. He has gone against independent advice more times in 15 months that Labour Minister’s did in 9 years. 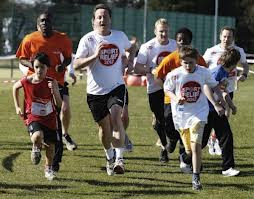 "Quickly kids, before that nasty Mr Gove sells the field off"

Now there is plenty of money to be made out of selling off playing fields and with Mr Gove and his Free Schools experiment there will be far more fields under threat. In Ipswich we have had much written about the failure of IBC, SCC and The Ipswich Academy to come to an agreement about the building of the sports centre. Wonder if Tory run Suffolk County Council will be asking Mr Gove if they can sell off the sports fields at the Holywells site?

So Mr Cameron has now gone on holiday (Mr Gove must have taken a longer holiday, as we have not heard a peep from him – (about playing fields, teaching sport in schools or even exam results!)

Will Mr Gove now resurface? Will he reverse the decision to axe the 2 hours compulsory PE lessons in schools? If he does will he also ensure that Free Schools and academies also have to make sure their pupils also continue to be taught PE?

As Ed Miliband and Andy Burnham have stated – sporting legacy has to be all party – it has to be a long term plan – the Olympics were a success because of that – Blair, Brown, Livingstone and in particular Tessa Jowell started the whole policy and Cameron and John son carried it on – not sure what Hunt did?

My final question – what is the Lib Dem views on Sporting Legacy? I ask as they seem to have had little input into the Cameron and Johnson declarations on sporting Legacy or been critical of the plans to sell off sports fields by Mr Gove. Probably concentrating on reform of the House of Lords!