This week we had a visit from a Labour big wig, Harriet Harman – a meeting with grassroots members, Harriet was here to speak about changes to the Labour Party but also she wanted to know what members in Suffolk were concerned about and no surprise to me that education was the number one concern for us in Suffolk. 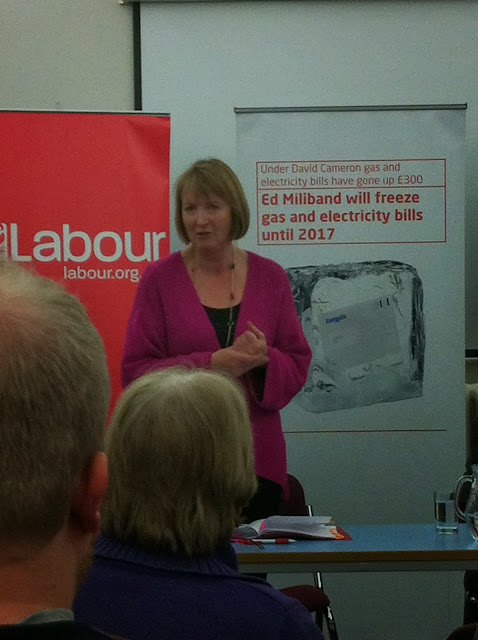 There were a number of passionate speeches about the way our children are being let down by a Tory run County Council combined with the bullying tactics of Michael Gove and the DfE.

Then on Friday, the bully himself turned up to open the new Ipswich Academy, a school that would have been built far earlier if Osborne had not put a halt to Labour plans on school building.

But unlike Harriet, Gove did not have time to talk to Tory members, pity as you would have hoped Ipswich Tories would have pointed out how education seems to be such a low priority to their Tory colleagues running Suffolk.

Gove did find time to speak to local radio and TV, but talking to the public was certainly not on the agenda as the visit was kept as secret as possible, rumour has it that they were not even keen on inviting the local councillors to the ‘grand opening’ . Secrecy and lack of transparency seem to be the way Gove likes the run education in this country – so much for parental choice.

But Tory policy does seem to be written on the bag of a fag packet (you can write more on the back of the packet now, thanks to yet another Cameron U-turn this week)

On Monday, David Cameron changed his position on payday lending, having spent three years resisting calls to cap the cost of credit, and even whipping his MPs to vote against it in Parliament.

Then he changed his mind on introducing standardised cigarette packaging - even though he announced just this summer that he was ditching the policy, shortly after appointing the tobacco lobbyist Lynton Crosby as his election adviser.

And then at the end of the week we have seen total confusion on energy, with the Tories denying that they had begged the energy companies to freeze prices up until the election. Then the energy companies saying they had been asked/begged to reduce prices- well at least till after the election! David Cameron has shown he can't and won't act on energy bills, because he won't stand up to the big energy companies. There is only one strong and credible plan which is Labour's plan to legislate for an energy price freeze until 2017.