Crimea - always more important to the Russians than the Ukrainians

In 1993, I was fortunate to visit the Ukraine and the Crimea. The 10 days in the Crimea were to be spent in Sevastopol studying the Crimean The war famous for Florence Nightingale, Charge of the Light Brigade and the Battle of Balaklava. But for my regiment – The Royal Green Jackets, it was the action when crossing the Alma that we hoped to look at. 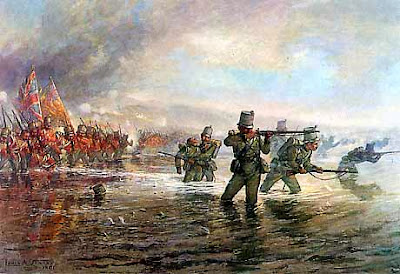 Crossing the Alma - will British soldiers be crossing it again soon?

Arrival in Kiev was smooth enough and we quickly settle in, helped by our lowly paid guide being a former Colonel in the Soviet Air Force. Ukraine in 1993 was still a ‘young’ nation but even then in Kiev there were many who wished to still be part of the Soviet Union and many more who had wished to stay communist.

We boarded the overnight train to Sevastopol, no tickets but the train guard seemed to be expecting us and we soon settled into our beds , waking in the morning we were now in the Crimea – the ‘bread basket’ of the Ukraine, on the last part of the journey we were asked for our passports, not by Ukrainians, but by Russian (plainclothes) Military police. They soon left us – trouble was, they left with our passports.

We got off the train and had to decide between buying a bottle of vodka for 40p or trying to get our passports back – we decided on both! After paying a fine (in dollars) we were told we had to leave Sevastopol/Russia and return to Ukraine – a taxi ride took us to Simferopol, the Crimean capital. Not much there so after a night we took a bus to Yalta where we planned how we were going to get back into Sevastopol.

We found Yalta (in 1993) to be a run down resort, full of Russian gangsters/new money and elderly Germans. We made friends with a German couple who now lived in Australia. The gentleman had found himself in Sydney via a POW camp in Huddersfield.

The Germans were in two distinct groups, both ex German Army and in some cases SS veterans but one group mainly from the West were quite affluent whilst those from the former East Germany were not as well off but far more friendly.

They had permission to visit Sevastopol so allowed us to tag on and we were soon made welcome on their coach. The city of Sevastopol was amazing but other than a recent monument and the small building hosting a historical panorama there was little evidence of the 19th Century war but we found many memorials to those who defended the city in the 1940’s. The other sight that quickly was noticed by myself and fellow soldier travelling with me was the amount of Russian ships and submarines – many rusting but we could see nor sign of any Ukrainian military in the whole city. They would have seen as much out of place as the Spanish Navy in Gibraltar.

So Ukraine is a complex situation, Crimea is already an autonomous region and though my visit was over 20 years ago, it is still quite obvious that the second largest city in the region – Sevastopol was full of Russians and completely under their control.

The other issue which has slight similarities to Syria, are we certain that the ‘opposition’ (who are now the interim government) the people we want to work with. There is no doubt that the far right have got them into positions of power and there is also the religious link to the ethnic problem. When I was in Kosovo in 1999, the Russians saw themselves not only defenders of the Serbs but the Slav race and the Orthodox Church. In Kosovo it was defending the Slavs against the Muslims but the Ukraine has closer similarities to the Serbia/Croatia conflict – Slav v Catholic.

All in all it is a mess, what should we do? What did we do when Hungary in the 50s and the Czechs in the 60s stood up to the Russians and then were trampled by the Soviet Army? – Nothing!

Some deranged Tory MP is blaming Ed Miliband for the Ukraine crisis – saying that Putin is taking advantage of our decision not to intervene in Syria! What rubbish, it is more likely that Putin is thinking about what happened in the 50s and 60s rather than what we have not done in Syria.

Will there be war? I hope not but can see the Crimea continuing to be a hot spot and in the end seeking full independence rather than just being an autonomous state.