Tuesday – 1 April, 8am, Start of a march from Ipswich (Tory MP Ben Gummer office) to Norwich, to protest about cuts to Mental Health services

A superb Saturday, (other than a mistake of a re-tweet by myself giving local Tories an opportunity to have a go at me) starting in the morning at Cherry Lane Recreation where we had the ‘Grand Opening’ of the new play area by the Mayor of Ipswich. The project had taken over two years and the final result was thanks to all the hard work put in by local residents with Jim Jenner leading the project and with the great support he received by Sam and Ipswich Parks team. It was also good to see so many local councillors at the opening, money had come from County Councillors plus a large grant from the North East Area Committee and these grants then enabled to get match funding from Viridor (land fill tax). 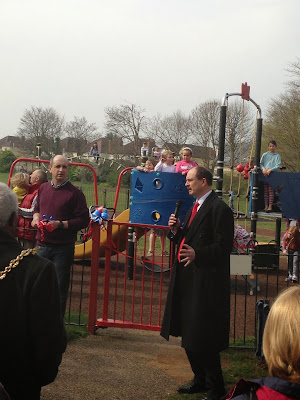 I hope the success of this project and the ability to gain match funding will show those within the Tory Group that area committees can gain far more for their communities than the old area forums or by just giving each councillor a small locality budget. The opening was attended by 5 of the Tory Group so let’s hope in the next municipal year they decide to work with us on the area committee action plans rather than sniping from the side. By attending yesterday they should be now have no doubt the good work that an area committee can achieve. The other good news about yesterday was that the event was attended by a couple from the West of the town who are now attempting to repeat the success of Jim and his team on a park in Castle Hill. 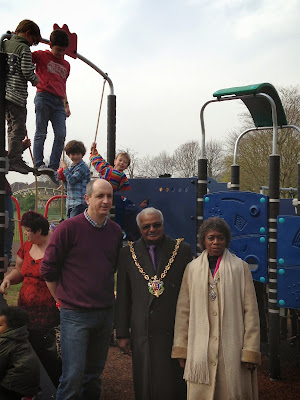 On Tuesday, I will be at the office of Ben Gummer to see the start of a march to Norwich, to protest about cuts to Mental Health services in both Suffolk and Norfolk. I wonder if Ben will be there?