The main event this week was the Police and Crime Commissioner election, we knew we had the best candidate in Jane Basham and we knew we had fought the best campaign but we also knew that Suffolk was supposedly the 6th safest Tory seat in the country. But as we now know, Jane came top after the counting of the first preference votes.
So with Tim Passmore only winning after the counting of the second preference votes and the very low turnout (repeated all over the country) he seems to have little mandate to run the police in Suffolk. 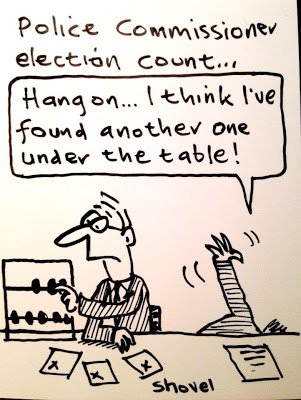 More disappointing he still seems determined not to give up his council seat on Mid Suffolk District Council – and we now wait to see if he will appoint a deputy with at least one Ipswich Tory hoping to secure the (well paid) post.

In Ipswich we had a great result, securing over 50% of the vote and hardly any change was seen in the figures after the counting of the second preference votes. We now need to keep working for Ipswich residents to ensure we maintain our Labour vote and also appeal to those who feel let down by Mr Gummer and this Tory/Lib Dem Government.
The number of spoilt papers was much higher than a normal election – but spoilt may give you the wrong impression – on a General Election a spoilt paper often consists of a number of swear words or the elector showing a desire to vote for a party not standing (or in the case of the BNP, you also have the swearing) but on this election the spoilt papers often consisted of very rational thoughts and some were almost mini essays. One voter even attached a pink postit with an apology on for spoiling her paper.

Both the Tories and Lib Dems need to ask themselves why this election was so poorly supported. Failure of Lib Deems to stand, Lib Dem insistence that the election was not held last May, the Tory Government refusal to give a free posting to all candidates.
I just wonder how low the turnout would have been if Suffolk Labour had not campaigned so hard and taken our message to the every corner of the county.

We have already seen the knee jerk responses to the PCC Elections and the Corby result – The Tories are now talking about the EU and stating that the new Commissioners do have a mandate (they seem to have separate rules when it comes to Unions and strike ballots) and the Lib Dem MP’s are now looking to save their own skins/seats and stating they are against a number of Government policies- even though they voted for most of them.

So far we have had silence from the local Tories and Mr Gummer – I think if Ben wants to hold Ipswich he needs to do more than invite residents to Westminster – but even this plan seems to have been hit by inflation – last month Stoke Park residents were charged £15 to visit Parliament but my letter from Ben yesterday offered me a seat for £20 – high inflation or the extra 4 miles we have to travel? The count on Friday and the Corby result should indicate to Mr Gummer that Ipswich residents are not happy with his party. Local Tories have also been silent – no blog posts and little chat on twitter- no mention of the Bixley Polling station they ‘saved’ maybe because only 17 people used it – wonder how much per vote that cost Ipswich residents? Then again they can just blame their own Government for the whole badly organised election and stupid concept of PCC.