On Thursday we held our latest North East Area Committee meeting and though we have had a healthy attendance at most of our meetings at this one we had over 70 residents attend, our best attendance so far.

Many attended for the first time and they came along to question Tory Councillor for Rushmere, Judy Terry about her statements in the local press about their homes – the much loved prefabs

These bungalow type houses were built just after the war and were at first were expected only to last 25 years but over 60 years later they are still going strong. Other prefabs in the town have been knocked down, but the proximity of the Rushmere prefabs tom the Suffolk countryside and the long gardens have made these dwellings much demanded.

The reason for the sudden interest in the prefabs is that Cllr Judy Terry mentioned her plan for their demolition and replacement with new houses and a care home at a Suffolk County Council meeting – now this is quite strange as the prefabs are the responsibility of Ipswich Borough Council and Richard Pope is the Tory spokesman for housing and he also seems to have been caught unaware by the plans of Judy Terry. She indicated that she already had been in discussion with two developers and a local architect and had even take her County colleague Colin Noble along to ask him advice on the site for a care home. ( a point of information it is worth reminding everyone that the prefabs sit 400 metres from two existing care homes that the County has handed over to Care UK and that Judy Terry sat on the planning committee that approved a care home to be built 200metres further up Humber Doucy Lane.)

Within hours of the Judy Terry making her proclamation of this new development in Rushmere (the announcement of this proposed development did seem to be another excuse to be used to back up the Tory view that the Northern Fringe development is no longer needed) residents were up in arms, and quite quickly Judy Terry had issued a press release to say all she was calling for was a debate about the future of the prefabs and was not calling for their demolition.

The press release was used by Ipswich Spy and even received a comment from her Tory colleague Colin Noble – who tweeted: “Cllr. Terry recently took me for a walk around the estate and shared her vision, I could not agree more with this campaign, clearly residents do what they can to make the best of the situation but Ipswich Borough Council should be ashamed to have these pre-fabs in their stock. Time to rebuilt, residents deserve better than the pathetic sticky plaster proposed by the Labour Leadership. “

Now what followed was number of letters from residents and ex residents of the prefabs, all unhappy with Judy Terry’s plan – many of the residents are some of our senior citizens (not all) and they were very concerned that were suddenly to lose their homes.
It quickly became quite obvious that her ‘vision’ for Inverness Rd was not one shared by the residents and this led to a number attending the area committee, two had also sent in formal requests for a detailed answer on the future of the prefabs from the council.

At the start of the meeting, one Tory councillor asked me why so many people were at the meeting showing that the Tory Group were oblivious to the uproar Judy Terry’s statements had caused.

As chairman of the committee, I read out the two questions and also the prepared answer I then allowed Judy Terry to comment. Her only line of defence was that she wanted to start a debate- not sure you start a debate by talking to two developers and getting plans drawn up before you speak to either the landlords (Ipswich Borough Council) or the residents.

Her excuses did not seem to please the residents and a number then asked Judy Terry a number of questions, one asked why she had taken Mr Noble round the area- Judy Terry said she did not know anyone called Noble, I then indicated that they meant her Tory County colleague, Colin Noble. She still seemed to deny that she had taken Cllr Noble round the area of the prefabs.

Two 24 year old sisters then stated that they were unhappy with Cllr Terry’s claim that the majority of the residents were aged or disabled. A number of the prefabs have been purchased from the council by the tenants and one lady who had purchased hers was almost in tears as she informed Judy Terry that her irresponsible comments had now made it impossible to sell her own home.

After 15 minutes of questions we had to move onto other agenda items but I allowed Judy Terry to make a closing statement, she then blamed a Labour councillor for saying that the homes need to be demolished. I then added the closing remarks to the debate, stating that we know the prefabs will not last forever but when we do make a plan for their future it will be the residents who will be the first to hear and they will be consulted. I then asked Judy Terry two direct questions in front of the audience, did she invite Colin Noble to visit the area and if she did not why did he say he had visited the area of the prefabs? She stated for the third time that evening she had not taken Cllr Colin Noble round the prefabs and did not know why he had said he had visited!

At the end of the meeting Judy Terry spent a number of minutes discussing the prefabs with residents as her two Tory colleagues seemed in a hurry to leave. I and my Labour colleagues also spoke to some very angry and upset residents who informed us that they would call for the resignation of Cllr Judy Terry at the next are committee.

An eventful meeting that left many of us shocked and rather unsure what Judy Terry had planned. We did not have to wait long – under 10 hours to be even more confuses! The next morning Ipswich Spy spoke to Judy Terry and reported her view of ‘prefab gate’. She now informed us that she had invited Colin Noble round the area of the prefabs (she had denied this in a direct question from me only hours earlier) she still stated that she only wanted to start a debate (no mention of developers and plans already drawn up). She also indicated that by myself saying the ‘prefabs will not last forever’ that we do have a plan and we were hiding it from the residents. Only a week earner she said she had only raised the matter because we did not have a plan!

She then accused Labour of inviting residents to the meeting (not that would be wrong) in a leaflet we had delivered on the estate – the leaflet we did issue to allay residents’ fears does not mention the area committee. (The false accusation about the Labour leaflet was then repeated by another Tory blogger here). But most upsetting was her comments on why Labour councillor Tracy Grant was not at the meeting, implying that Cllr Grant was scared to attend in case she was asked about her views on the prefabs. Again Cllr Judy Terry is wrong Cllr Grant had given her apologies over two weeks before the meeting and before Cllr Terry had raised the prefab issue. Tracy works for Suffolk Police and they are so short staffed she was not allowed to have time off for the meeting. I hope Judy Terry has the decency to apologise to Tracy Grant (this inaccuracy about the attendance of Cllr Grant was again repeated on an Ipswich Tory blog)

So it seems Colin Noble did visit the area of the prefabs and thinks we should be ashamed of these much loved houses – people’s homes!

This still leaves a number of questions for Judy Terry to answer;

1. Why did she say Colin Noble had not visited the prefabs?

2. Why did she make an incorrect statements about the attendance of Tracy Grant without checking the facts?

3. Who are the two developers, did they approach her or did she approach them?

4. Are Care UK involved with the proposed care home?

5. Will the replacement 220 homes be council owned? 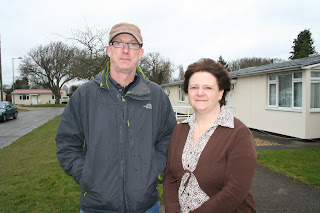 More worrying is that Judy Terry seems to have difficulty in remembering what she has written or what she has done. At the last Full Council we had #Flyergate where Judy seemed to forget what she had written only weeks earlier in her Flyer column (her excuse then was she must have written it last year and had forgotten what she said) and now we have even more worryingly her inability to remember inviting a fellow cabinet member round the Inverness Rd area. She also seems to have none or little support from her Ipswich Tory colleagues, the Tory housing spokesman, Richard Pope did not even know of her plans for the prefabs. Maybe the pressure is getting too much for her.

I hope she will use the comment section on this blog to answer the 5 questions I have asked, and also that she has the decency to apologise to Tracy Grant.

But I think that this episode shows that many residents no longer have confidence in her ability to look after their best interests- and that many of them will use their vote on May 2nd to say that she is no longer wanted as their elected representative.

Footnote: Cllr Tracy Grant could not attend the Area Committee because of her work for Suffolk Police but on the same night the Police and Crime Commissioner attended the South East Area Committee – but he also seemed to lack the support of his Tory colleagues as all 3 Tory Borough councillors in the South east failed to turn up!