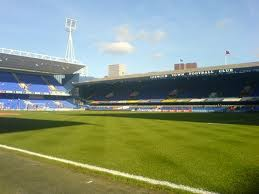 Ben suggested this in an article in the Ipswich Star at the start of the week, MP Gummer says he believes the council should cash in on the ground in order to buy waterfront land close to Stoke Bridge for redevelopment: “I don’t want to tell the council what they should or should not sell, but we know the football club is keen to buy the freehold of Portman Road.”

This had led to a debate on Ipswich Town fans website TWTD, with most comments against the idea.

There are many reasons why I am against the plan both as a Councillor and an Ipswich supporter.

As a councillor I can see that buying the last disused buildings close to Stoke Bridge may help re-start development again on the waterfront but the same could be said if the council purchased the CO-OP building in Carr Street, this may give the town centre a boost.

It is believed the club offered a million pounds but currently the council gets £100 thousand a year from the club so with interest rates so low the council are getting a good return on their land already whilst the club have a long lease of over 100 years and are still paying a very low rent.

To be fair to Mr Gummer, Archant Press (the Star and EADT) are keen to kick start the waterfront development as they wish to sell their premises close to the river and Mr Gummer may have not come up with the plan on his own but Mr Gummer is keen to get the waterfront sorted as he has made it a big issue that he gets the Irish banks to work with others to see the ‘wine rack’ turned into a finished building. This might help and he would love to see building started again before 2015 – might be his only hope to make a fight of the election.

But as a Football fan I am very against the sale of the ground, just look at was happened at clubs Brighton, Chester, Darlington and Wrexham – fans left fighting to save their clubs- look at the current state of Portsmouth, the supporters trust have agreed to buy the club, but who owns the ground is holding the deal up and may see Portsmouth fold.
Brighton sold their ground and ended up playing in East Kent- miles from their Sussex home.

Marcus Evans has put plenty of money into the club but what if he sold his interests to a new owner? At least with the ground in the council ownership we know that an unscrupulous owner can’t sell the ground from underneath us.

So Mr Gummer seems to have come up with an idea without consulting supporters first, similar pattern immerging here – sound like Cllr Terry planning to knock down the pre-fabs in Inverness Rd without asking residents. Though Cllr Terry may use the same excuse Cllr Cenci used in defence of Mr Gummer – “ he may have been misquoted"
Posted by Alasdair Ross at 21:26