This week I have been able to combine my two loves- politics and football when I attended an event at the 4TO Bar in Ipswich. Lenny Paul who owns the bar is like me, Ipswich born and bred and also an ex soldier but unlike me he is a four times Olympian! Bobsleigh. 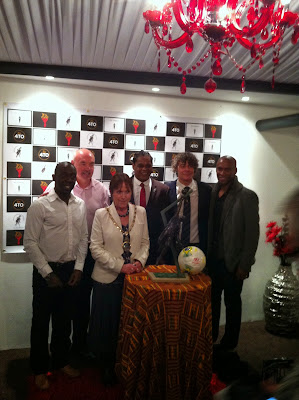 He has just been inducted into the Arthur Wharton Foundation, Arthur was the first black professional footballer playing for a number of North East teams in the 19th Century plus also playing cricket and holding the 100 yards World Record. He was a tough man with Ghanaian and Scottish roots.

It was great to see the event supported by IBC, Johnny Wark, Fabian Wilnis and Ruel Fox. Pity no one was there from the Football club.

Ipswich Spy had a bit of a go at me for a tweet about the Tory Culture Secretary, Maria Miller. A press release was issued in her name about the release of Unit War Diaries from the First World war, the press release seemed to indicate that these were soldiers own diaries. I do realise that the press release would have been prepared for her but was surprised that with the important events coming up over the next 4 years that Ms Miller did not have a clue on what was being released in her name or that she had not asked for a full briefing on the release of these diaries.

One good thing I can say for Maria Miller is – at least she is not Owen Paterson!

As the organiser of the event and Ipswich born, I too was very upset that ITFC did not send any representation from their current team. I made several attempts with phone calls and emails and I hinted that there would be some big news for the foundation. The unveiling of a statue at St Georges Park, the home of the FA is not everyday news in football.