Ipswich suffragettes who refused to be counted in 1911 census 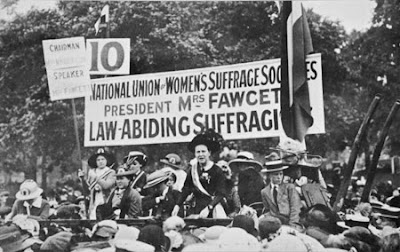 On Friday night I attended a lecture organised by Ipswich Labour on the subject of the suffragette movement in Suffolk.

Joy Bounds gave the lecture and she had been asked after a number of Labour members had attended an anniversary dinner in Arlington’s in Ipswich last year.

Joy started my showing that Suffolk was a hotbed of women militancy, in 1866 women organised a national petition to ask Parliament to give women the vote- there no signatures on the petition from Norfolk or Cambridgeshire and just 5 from Essex bit in Suffolk 48 women signed the petition.

Many have heard of the Pankhurst family and their involvement in the suffragette movement but Suffolk had their own family of well-known women activists, the Garrett family. The most famous of the sisters was Elizabeth who became the first woman Doctor in England and whose family home was Aldeburgh. The new building at Heath Road Hospital in Ipswich is named after her. She was key supporter of the suffragette movement but decided to keep a low profile so it would not damage her medical career. The suffragette cause was then taken on by her younger sister, Millicent Garrett who went onto marry the blind radical Liberal MP, Henry Fawcett. She went onto become the leader of the National Union of Woman’s Suffrage Societies.
This would lead Millicent to spend much time in London but Ipswich was home to its own branch of the NUWSS, with an office in Arcade Street. The local leader was Constance Andrews who spent a week in the Ipswich jail after refusing to pay her dog license! On her release she was met by large crowds who then followed her to Arcade Street for a celebration breakfast.

In 1911, the socialist MP John Burns had come up the idea of a national census this he hoped would highlight the level of infant mortality. Many of the suffragettes agreed with what Mr Burns wanted to achieve so it was surprising that they went forward with the plan to boycott the census. They could do this by refusing to answer any questions on the census or to be away from home on the night of the census. Though many agreed with the census they were also annoyed by the Liberal Prime Minister, Asquith who was a fierce opponent of the vote for women.

This is not the last tale of the suffragette fight in Suffolk, in 1914 tow suffragettes burnt down the Bath Hotel in Felixstowe, leading both women being sent to jail. Many of the suffragettes who were jailed then went on hunger strike, but they were then force fed and it even caused the Liberal Government to bring in the ‘Cat and Mouse’ Law, this would come into force when a suffragette was force fed, when she became very ill she would be sent home only to be sent back to jail once she had recovered her health so she could finish her sentence.

So Ipswich and Suffolk should be very proud of these brave women who made Suffolk such a stronghold for the suffragette movement. Thinking of my late Mother and those women who served on the council with her and the current female Ipswich Councillors, it is obvious that we still have the same strong willed women in the Labour movement.

More information on local suffragettes can be found here and here.
Posted by Alasdair Ross at 22:24