Support talent of the future

I do not usually re print my Evening Star column in my blog, but as the two recent 'Star' stories have an interest to people beyond Rushmere Estate, I thought I would.

As an Ipswich supporter I always feel even more proud when a Town teams wins with products of our famed Academy in the side. You may wonder what this has to do with North east Ipswich, but currently one of those players who has us feeling good about our football is Luke Hyam a product of Northgate High School. He is not the only Northgate old boy playing in the Championship, with Liam Trotter who was in my daughters class at school not only playing for Millwall but also captaining the side – another Ipswich academy product. 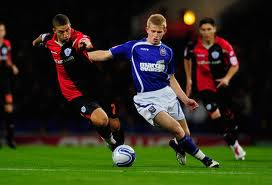 But in the future we may see ex pupils from Northgate, St Albans and Copleston plying their trade up the road in Norwich.

Currently the FA are looking at changing the Academy system and Ipswich town have to decide if they wish to apply for Category 1 Status or Category 2, many Football League clubs will end up only having Category 3 or 4 and some will not bother having an academy at all.

With the money made from the sales of Wickham, Dyer, Bent and others it would seem a no brainer but the Football Club say they have still not decided and that the cost of Category 1 could force them back into administration.

Norwich will go for Category 1 as will some Championship clubs like Watford – I feel we should go for it and make it work, the Ipswich Town Independent Supporters Trust are pushing for Category 1 and over 5,000 signatures on a petition that they will hand into the club asking for us to seek Category 1. I back them fully and not just because I am a football fan but also for the sake of our kids and parents. I want them to be trained and nurtured at Ipswich not up the road in Norwich. Just think of the cost in petrol alone as Ipswich parents traipse up to Norwich or even south to East London.

So if you see Trust members outside the ground at the next few home games, sign the petition. It has been backed by ex-Town players like James Scowcroft and even top football journalists like Henry Winter. If we want to see more Northgate pupils follow in the footsteps of Liam Trotter and Luke Hyam we need to have Category 1 Academy status.
Posted by Alasdair Ross at 09:47