I do not usually re print my Evening Star column in my blog, but as the two recent 'Star' stories have an interest to people beyond Rushmere Estate, I thought I would 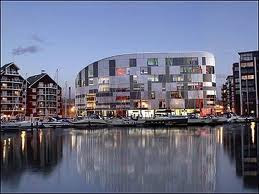 A half term football match enables me to combine a visit to my daughter at Portsmouth University and a chance to watch Ipswich on the South coast. Now Portsmouth may be struggling as a football club financially but as a university city it is thriving and both Pompey and Southsea are destinations that many of our young Ipswich residents head for.

As you walk along the Southsea Common you will pass hundreds of students going between the campus and their rented houses in Southsea, we hope that in a few years’ time as we walk along the Waterfront in Ipswich we will pass hundreds of students moving between the UCS Campus and the town centre but there are doubts and the reduction in the number of young people applying for university places is a worry. Even more so with UCS reporting a drop in figures as we know many of their prospective students would be Suffolk residents who have chosen UCS – not only because it is a good university but also so they can keep the cost of studying at university as low as possible by living at home.

Back in December 2010, Ben Gummer spoke in Parliament in favour of raising university tuition fees. Rather paradoxically, he is on record in this debate as saying “the continuation of university campus Suffolk is critical to my voting in favour of these proposals” . How could increased tuition fees improve the financial chances of a fledgling university in the early stages of developing a reputation worthy of such high tuition fees?

Perhaps concerned at their ability to attract student applications, UCS (University College Suffolk) did not utilise the full potential of the tuition fee increase that most universities adopted. In March 2011 they announced tuition fees for UK and European Union full-time undergraduates for 2012 entry at £7,500 for Foundation degrees and £8,000 for Bachelor degrees .

So it seems many of us have been proved right and Ben Gummer wrong, the raising of tuition fees has not helped those who wish to go to university and is certainly harming new universities like UCS as they attempt to follow Portsmouth and become a town that attracts students in their thousands rather than hundreds.
Posted by Alasdair Ross at 09:54