Abolition of the Slave Trade- a reason for Ipswich to be proud. 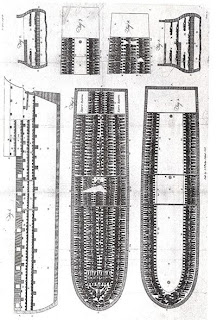 Today is the 200th anniversary of the passing into law of the Slave Trade Act. This Act abolished the British slave trade, the US passed a similar law the following year.
This has rightfully caused a significant amount of media interest, much has been on whether we should be celebrating this occasion at all. though the act was passed in 1807 it was not until the Abolition of Slavery Act was passed in 1833 that slavery ended in the British Empire. When it ended the government compensated slave owners in the West Indies - the slaves getting nothing! It was also a further 20 odd years before the slave trade finished in the United States. We must also remember that recent reports still put the number of slaves in the world at over 27 million! For further reading on the current slave trade, try this site for starters.

But I feel we should celebrate the passing of this act and more importantly honour the men and women who bought it about.

William Wilberforce is still the key figure we remember when discussing this topic but in Ipswich we should also be proud of local man, Thomas Clarkson. Though born in Wisbech, he had many Suffolk connections, marrying a Bury St Edmunds girl and eventually settling just outside Ipswich in Playford, where he died and is buried at the local parish church.

It was in 1785 that Clarkson penned an essay about the slave trade (the essay included the diagram of the Brookes Slave Ship, and how 600 slaves were fit into the hold.)that led to him devoting his life to the ending of this cruel trade. one of his supporters was an Ipswich Quaker - Richard Dykes Alexander, and it is on land that he owned that you can now find the Ipswich streets, Clarkson , Wilberforce and Bezenet (also involved in the stopping of the slave trade).

There is a call for Tony Blair to make an apology for our involvement in this vile trade but I feel that is of little benefit to anyone. instead we should remember those who helped pass this act and also focus on passing laws in this county that stop events like the drowning of the cockle pickers in Morecombe happening- they were slaves to the gang masters of the modern day.

I do feel angry that Ipswich itself has not made more of our Clarkson connection, a service is being held today in Playford and also in Bury, the Suffolk Record Office is holding a number of lectures but it is all very low key. The local Tories often complain when they are accused of being a racist party but it is simple thing like celebrating Clarkon's life that lead to such accusations, they seem very keen on promoting a link with Jamestown in the USA- I am sure which will involve a number of visits but can not celebrate an event on their own doorstep.
Posted by Alasdair Ross at 12:36

Excllent post Alasdair. I can't understand why more wasn't made of the Clarkson connection. I see that he has qite an impressive memorial in Wisbech.

I really do like your blog, Alasdair. Just added it to my blogroll

"I do feel angry that Ipswich itself has not made more of our Clarkson connection, "

It's because they are white Christian men, and from a PC point of view unsuitable for praise in modern Britain.

Not sure it is because of the PC brigade that we have not made more of our Clarkson link- but it is probably because of politics- i am afraid that the Tories in Ipswich do not want to remember anything that may be used against them- not sure how something 200 years ago could be used. It is their in action that leads to accusations that they are still linked to racist views. The same with Europe, they did not want Ipswich twinned so not to seen as pro Europe and though we have a partnership with a French town- again little is made of it. Now they decide to link up with Jamestown in the USA!