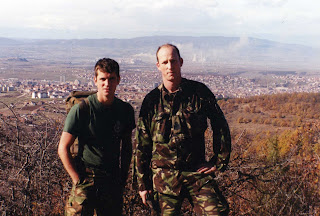 I was quite shocked when I read the copy of the full Patrick Mercer interview- shocked and very disappointed. Not because a Tory frontbencher had made the remarks but because a former senior officer in the Army had made such a statement.
To be honest I would expect many Tory MP's agreed with his view but it is, his position as an ex Regular Army Officer that concerns me.
I spend quite a considerable time defending the Armed Forces, for many people - since the end of national service - they do not have first hand experience of the Armed Forces or have had family who are or have served in the forces.
Mercer was right on a few points, the Army is no place for those with soft shells, the banter does fly but no sometimes it can go too far in most cases, commanders and instructors know where the limits are. True- ginger people do take the brunt of many jokes- but in the same way as the recent Catherine Tate sketch. what is not acceptable and I believe where Mercer gets it wrong is that the terms - "ginger bastard", "black bastard" and "fat bastard" are not common terms used by soldiers.
I served for 25 years in an Infantry Regiment like Mercer, and the army over that time became very aware that it was seen by many both inside and outside the black community as a predominately white organisation. the army set up a number of measures to counter this. To be fair to the Army, when I joined in 1978 there were a large number of black people in the Army, my regiment recruited from urban areas like East London and two of my first Sergeants were black. I never saw any overt racism but later in my career, serving black friends did say they had suffered at times. But the young black population did see us as racist- maybe due to the lack of black faces outside Buckingham Palace and that did keep recruiting figures low.
Mercer was speaking after the announcement of a black soldiers union- this is actually driven by those from the Commonwealth wishing to be represented- they have different problems with leave, culture, bringing wives and family to the UK and the subject of being granted British Nationality.
I totally refuse to accept Mercer's view of the Army- it certainly was not part of the regiment I was in, and certainly not the view of the Army that is currently serving in Iraq and Afghanistan.
I actually was in my Regiment in Bosnia in 1998 when we handed over to Mercer's Regiment. To be honest then myself and other senior soldiers were shocked by the attitude of some his Regiment- not racist but it just seemed to they had views and acted like a unit that was stuck in days of National Service- stuck in some sort of time warp- I am almost certain that attitude has changed dramatically since Mercer left.
Maybe Mercer left because he was not suited to the modern Army- lucky for him he found a place where his 1960's type of views were welcomed with open arms- the Conservative party.
I fear that he will actually gain some support- from those that like to quote political correctness as the route of all evil. I just hope a few Senior Officers will speak up for the Army and put Mercer in his place.
Alasdair Ross
ex Sergeant Major in the Royal Green Jackets- and proud of it.
Posted by Alasdair Ross at 21:14

Alasdair - Good to see you putting a real soldier's view in. I've taken the liberty of linking your blog to a news entry on this subject. Let me know what you think.

Rossy
Dont tell me that you were never called a bald bastard , I was called ginger bastard many times & heard many other names , fat bast , specky bast, taff bast etc I believe the media honed in on the Black & blew it out of context

I think your right the media picked up on the bklack bit- but it did not show the Army in a good light- and I know the army has and needed to change. What was more of a surprise is that Mercer made their front bench!

Alasdair, I agree with all you have to say about Patrick Mercer who unfortunately is my MP. Reading your views I wish you had said more about Mercer's Regiment in Bosnia and just what is was that shocked you about the attitude of some his Regiment.

The reason why Mercer left the Army seems to be because Mercer was the target of two IRA assassination attempts, which are detailed in the books "Dirty War" and "Trigger Men", both by Martin Dillon.

Apparently, Mercer worked in plain clothes in Northern Ireland and was said to be a member of the notorious FRU, which he would have us all believe is entirely untrue.

I do not understand why senior officers like Mercer, would be working in plain clothes, or if it was nothing unusual for the IRA to try to assassinate any Army officer in Northern Ireland.

I think Patrick Mercer is living in a time warp, and is the very worst kind of Colonel Blimp, a silver-tongued devil that’s become a demigod to our Tory town upper echelons, who all but beg for the privilege to wash his feet, credulous morons so entirely bewitched, they could never see the man behind the mask.

I will revisit your website in a few days and hope to read more of your opinions.

Thanks for the comment- did not know of Mercer's service in Ireland- to be honest most of what is written about the FRU and other under cover units is rubbish- and that icludes books/articles by ex Soldiers or efforts by journalists.
Soldiering and Policing changed dramaticaly over the years and you have to take with a pinch of salt anything that is written about the troubles

Some things, we should take with a pinch of salt, however in the matter of the activities of the FRU it would be wrong to look upon all that is written about the FRU in the suggested manner of a doubting Thomas. Therefore, we must give the benefit of the doubt to the Stevens Inquiry into the FRU and accept the word of a former FRU member, that the arson attack that destroyed the offices of the investigation of the Stevens Inquiry, was perpetrated by the FRU.

The FRU has been implicated in collusion and murder, furthermore Brian Nelson, was the chief of intelligence of the Ulster Freedom Fighters and a FRU agent. He was charged with murder and was jailed for 10 years on five counts of conspiracy to murder. Two widows of his victims successfully sued the Ministry of Defence because of the involvement of the FRU in the killings.

Mercer is now a Member of Parliament, so tell me, should we really take this with a pinch of salt?