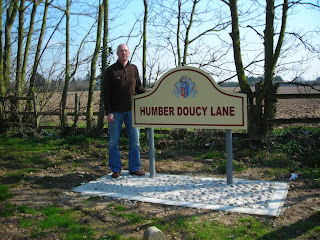 Panic on Saturday morning - the Party agent, John Cook had dropped off 3,000 leaflets on Friday night and there I was in the Golden Key car park on Saturday morning as the sky got very grey, felt the first spots of rain and just myself and Neil the St Johns candidate (who had another 1,000 leaflets). No need to worry, a fantastic turnout of Labour supporters led by our MP, Chris Mole and joined by County Councilors, Borough Councilors, candidates and activists.
So 18 0f us hit the streets of St Johns and Rushmere.
The high turnout even in bad weather- the reason why? Hard to say but maybe it is the last few weeks that we have really seen the true Tory (and Lib dem) face. Proposed cuts to the Ipswich bus service and the confirmed move of Day Care to the private sector, on top of that a bodged Education policy where the communication to both Schools and parents has been non existent.
It is also encouraging that the people of Ipswich are now realising that there is a great difference between Labour and Tory policy- they also seem to be getting the message that the Lib Dems will support anyone and say anything just for a bit of power.
Whilst out I was able to get a picture of the new street signs in Humber Ducy Lane. This road links Rushmere ward and Bixley (safest Tory seat in town). it is in Bixley that thousands have been spent on traffic calming where nothing has been spent in the Rushmere part of the road. After spending the money on the traffic calming they still had enough left to spend on street signs that are like the 'Welcome to Ipswich' signs on the A12! I am sure the residents of this road would rather have seen the money spent on traffic calming on the northern stretch of Humber Ducy Lane rather than these two -out of place - signs.
Posted by Alasdair Ross at 17:49