Somehow, I have ended up on the Tory MP for Ipswich, Tom Hun's mailing list - and in my inbox today arrived his latest effort. 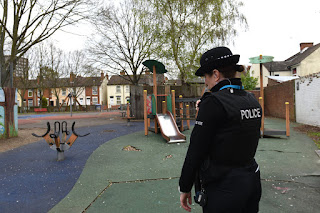 Talk of the football, no mention this time of his criticism of players 'taking the knee'. Other pieces are on worthwhile visits to schools, YMCA and Felixstowe Docks, then I got to a piece about a recent visit by Mr Hunt and the Tory Police and Crime Commissioner to Maple Park in Ipswich.
It seems either Mt Hunt was not aware of the facts of the recent successful bid for Home Office funding or he was deliberately 'twisting' the facts. so he would not have to give Ipswich Labour run Ipswich Borough Council any credit for the work they did.
Mr Hunt, stated that " Recently Tim (the Tory PCC) led a bid alongside the Borough Council to secure money from Government (and was successful in securing £4000,000) to invest in the area to fund more work to tackle crime and anti-social behaviour problems."
I would have thought Mr Hunt was aware that is not what happened. Mr Passmore, the Police and the Borough Council put in a bid for Home Office funding, but were unsuccessful. The Home Office then  asked would we like to bid again (we were given very little time to bid). Mr Passmore decided that he would not bid this time but was happy to support any Local Authority that did. Only Ipswich Borough Council put a bid in, our Officers did most of the work with significant input from Ipswich Police.  Mr Passmore supported our application. The other (Tory run) Local Authorities did not bid.
So no way is Mr Hunt correct in saying that Mr Passmore Led the bid alongside the Borough Council!! All the leadership on this successful bid was from Ipswich Borough Council - from our Labour Laeder, David Ellesmere, myself as Portfolio Holder and from our Officers with much needed valuable support from the then Head of Policing in Ipswich, Kerry Cutler.
I have to believe in this case Mr Hunt is deliberately twisting the facts to suit his own agenda.
Was pleased to see that Mr Hunt believes the work the Borough is doing in the area is working, but again he seems to imply that much of the work that is being done is because he asked us. Where in fact the council and in particular the three Labour Westgate councillors have been working hard to improve the area with the local community for a number of years.
Mr Hunt may be just saying he was expressing his own views but I for one am not sure an MP  stating that Maple Park was the most sinister arear in the town that he visited helps anyione, in particular those who call the area their home.
Posted by Alasdair Ross at 10:22