More good news for Ipswich - and this would not have happened with a Tory Council - it happened as we have great Officers and staff at Ipswich Borough Council and that in conjunction with good political leadership from Ipswich Labour, has allowed us to bid for more Government funding.
The final piece of the jigsaw, is working with partners and we had great support in securing the money from Ipswich Central, the Suffolk Police and Crime Commissioner, Tim Passmore and Ipswich Police. Our bid also had the backing of the County Council plus our neighboring districts. 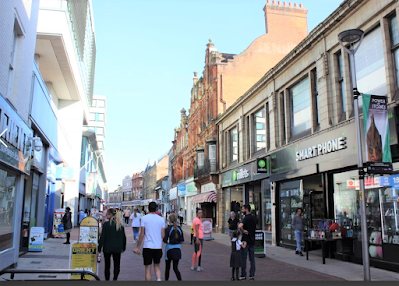 Ipswich Borough Council is pleased it will be becoming an even safer town, with new improvements to be made in respect of the safety of women and girls and a reduction in anti-social behaviour, such as violence, theft and criminal damage.

£500,000 has been awarded to Ipswich Borough Council from the Home Office’s latest round of Safer Streets Fund. The Council with its partners Suffolk Constabulary, Suffolk Police and Crime Commissioner, Ipswich Central and Suffolk County Council are also supplying a matched contribution of officer time and funding totalling £432,000 leading to a combined total project of £932,000.

These improvements will be in the town centre and Waterfront areas, including the main retail, hospitality and business districts as well as at the university area. Our consultations identified these locations as where members of the public and community groups wanted improvements. The focus will be on countering Violence Against Women and Girls (VAWG) and Anti-Social Behaviour (ASB) with initiatives will target crime related to sexual assault and harassment and ASB including violence, criminal damage and theft.

The remedies will include smarter CCTV with improved monitoring that will lead to swifter responses but also greater coverage for the cameras. Along with better signage, lighting and landscaping these will act to deter crime and give people more confidence when traversing the town, particularly at night.

Safe spaces/hubs with help points will be created and the ‘Ask for Angela’ campaign will be enhanced to include all town centre licenced premises and publicly accessible buildings, including libraries, retail & food outlets. Barwatch is a scheme that helps pubs and bars share information about the perpetrators about anti-social behaviour and this will be enhanced.

There will be better lighting in the subway at St Matthew’s Street. Townlink radio coverage, used by retailers and others to keep in touch with the police and security, will receive new radios for new premises. Personal Safety Alarms will be given out and Body-Worn cameras for door supervisors will be distributed.

“This winning bid by your Council will mean we can make many improvements in Ipswich that will make people feel more confident, particularly at night, in some of our central areas. We have overseen many improvements to make Ipswich  safer but we can always do more and these new anti-crime measures will make Ipswich better for all – except criminals.

"I am absolutely delighted to hear we have been successful in our bid for Safer Street 4 funding.

"It's really important that people feel safe in their homes, businesses and their communities, so I am pleased to see this investment in our county town, which will help reduce crime and the fear of crime.